“We Don’t Want It To End Here”

AFC Telford captain Shane Sutton is confident his side can overturn their semi final deficit against Leyton Orient on Saturday. The Bucks trail 1-0 from the first leg but with an expected sell out home crowd behind them, the 30 year old is raring to go. Speaking to Shropshire Star “we’re very confident, it’s only half time, 1-0 down, and the good thing is that we know exactly what we’re up against”.

MacAuley Bonne struck in the 54th minute to hand Orient a slender advantage heading into the second leg. Manager Gavin Cowan was happy with sides performance ensuring they have all to play for on Saturday. Speaking to telfordunited.co.uk “the objective to the players was to be in the lead or the tie. We achieved that, it’s 1-0 at half time. It’s the joy of being over two legs”.

With 30 league places separating the two sides, Cowan has urged his players to be fearless at the New Bucks Head. Orient are top of the National League and the 37 year old is hoping his side can play the underdog card to their advantage. Speaking to telfordunited.co.uk “we have nothing to fear, there is no expectation on us, no-one could even have imagined us to come through this. We can play with courage and freedom, all the pressure is on Leyton Orient. Anything we achieve after this is dream stuff, we’ve got real belief in the camp”.

The Bucks were backed by 429 supporters in the first leg and with it set to be their biggest game as a club since their reformation in 2004. A bumper crowd is expected to hopefully see them defy the odds and Cowan has insisted on the home supporters to push them on. Speaking to Shropshire Star “we really wanted the community to come and back us, they have done just that. The support for the first leg was unbelievable and we’re going to need them to make themselves heard again. It is going to be great to see New Bucks Head packed out with the supporters”.

Defender Sutton who has been with the Bucks since 2017 is relishing the visit of Orient and is hoping his side can use their home advantage. Despite the Bucks only playing one of their six trophy matches at home this season, Sutton is confident his side can overcome the deficit if they play to their best. Speaking to Shropshire Star “it’s a game we’re looking forward to. Look at our home form, I don’t think it’s been an easy place to come this year. As long as we can have that intensity and tempo which we have had at home, I am sure it will be an interesting game”.

Cowan admitted his side were reserved in the last 20 minutes in the first leg as they were looking to remain in the tie. Despite the O’s holding the advantage Cowan highlights that both sides will be going for the victory and playing on the front foot. Speaking to East London Advertiser “we have to set up to win the game, ultimately Orient will do the same. I can’t imagine Justin will be very reserved coming to us and I know we will be all guns blazing”.

Telford will have to defy the odds tomorrow because the last 21 sides holding a first leg lead have gone on to the make the final. After coming up against the Orient already, Cowan is excited about the second leg and is not expecting any surprises. Speaking to Shropshire Star “we’re pretty set on where we want to be and how we want to approach. We know plenty about them already but the players are fully aware of what’s ahead of them now” He added “it’s going to be tough. But it is one we are thoroughly looking forward to, we can’t wait”.

Goalkeeper Josef Bursik and striker Marcus Dinanga are both cup tied while Henry Cowans is out with a knee injury. Steph Morley is a doubt after coming off at Orient last weekend. Brendon Daniels could replace Morely while Dom Smith is pushing for a start after returning from his loan spell. 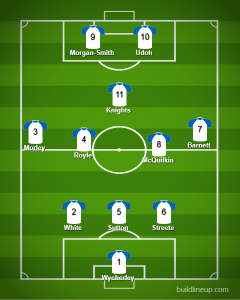