“They Have Got to be Professional”

AFC Fylde manager Dave Challinor urged his side to be put their FA Trophy Semi Final victory behind them. The Coasters travel to League Leaders Leyton Orient on Tuesday with the chance to cut the gap to just three points. Speaking to afcfylde.co.uk “I’ll enjoy tonight, they have got to be professional and do things right. They have an opportunity at the end of the season to celebrate with hopefully more success. Today is about recovering making sure we replicate the same elation on Tuesday evening”. 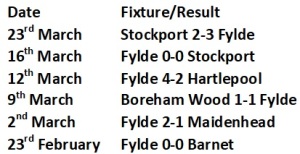 Fylde booked their place at Wembley with a 3-2 win at Stockport on Saturday. Nyal Bell put Stockport ahead before a Danny Rowe penalty and Ryan Croasdale strike put them in control. Ash Palmer equalised late on but Alex Reid’s strike earned their victory. Croasdale spoke to afcfylde.co.uk “it’s probably the best performance we’ve had this season and to do it under the pressure of the semi final is a credit to the lads”.

The Coasters trailed for a long spell on Saturday before top scorer Danny Rowe levelled. Despite being a goal down, Challinor was delighted with his sides performance, mentality and character to pick up the victory. Speaking to afcfylde.co.uk “I thought we were fantastic, I really thought we dominated the game, territorially but we gave a sloppy goal away. We got an equaliser then got ourselves in front but disappointed to concede from a set piece. But we showed unbelievable amounts of character to get the winner”.

Challinor who has been with the Coasters since 2011 was brimming with pride about taking his side to Wembley. The 43 year old has guided them to three promotions in his tenure described it “biggest honour in management”. Speaking to afcfylde.co.uk “it was amazing, very emotional after the game, I am bursting with pride for me to take my team to Wembley and walk them out at Wembley will be my biggest honour in management. They had the opportunity to make it happen and I am thankful for it. To watch them at the greatest stadium in the world would be absolutely fantastic’.

Fylde are right in the mix for promotion with their rivals all dropping on Saturday. The Coasters along with Orient have at least two games in hand on teams in and around them and Challinor is keen for his side to fully concentrate on the remaining league games. Speaking to afcfylde.co.uk “we have showed throughout the season we can put it to the background. Today we can focus on when it comes around, the players have an opportunity to show what they can do and showcase their talents. We have to look forward to that”. 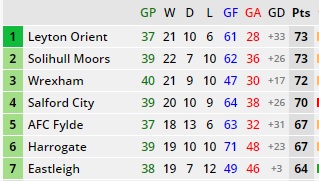 Dave Challinor is expected to make some changes to his side. Jordan Tunnicliffe should be fit despite suffering a broken nose on Saturday. Dan Bradley, Ash Hemmings and Lewis Walters are all back after being cup tied against Stockport. Serhat Tasdemir is still away with Azerbaijan U19’s.

The Three Meetings Between Sides 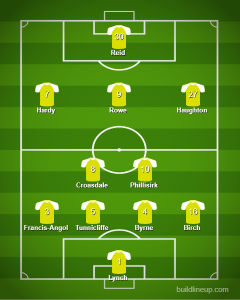