Exeter City manager Matt Taylor is relishing life at the top of League Two but insist his side won’t be sitting on their laurels. The Grecians host Leyton Orient looking for a fifth consecutive win for the first time since January 2017. Taylor stated to exetercityfc.co.uk “I’m expecting a good game of football. We’re in good form, up against a team who have got to come to our place and give it everything they have got”.

Exeter made it five wins from seven league games last weekend with a 3-1 victory at Carlisle. Lee Martin set them on their way before Olufela Olomola equalised but second half goals from Aaron Martin and Nicky Law sent them home happy. Taylor was left happy with the win but knows their was some room for improvement. Speaking to exetercityfc.co.uk “it was a good performance, I wouldn’t say great performance. We would have killed Carlisle off a lot earlier than we did”. 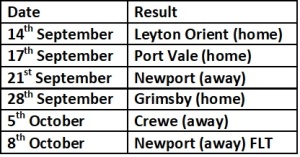 Following an unbeaten August, Taylor was named League Two manager of month on Friday after collecting 14 points from a possible 16. Despite an unbeaten start, Taylor was quick to look forward and continue their form in September. Speaking to exetercityfc.co.uk “you want to keep on playing well, you want to keep picking up points. We had a private meeting this morning where the emphasis was on the opportunities to come in the next few weeks and we’ve got to make the most of them”.

Midfielder Nicky Law returned to the side at Carlisle last week after recovering from injury, netting on his return. The 31 year old joined the Grecians back in 2018 and praised the togetherness in the team. Speaking to exetercityfc.co.uk “we’re in a good place as a team, everyone is playing well. The ethic we have this year, no stars, team ethic from front to back. The back boys have had a lot of credit and rightfully so. We’re delighted with the start, unbeaten”.

The Grecians netted three at Carlisle but Taylor thought his side should have scored more. Exeter have only netted four goals in four home games so far this season but the 37 year old feels his side need to be more ruthless in front of goal. Speaking to exetercityfc.co.uk “if you’re going to be close to the top or compete at the top of the league, you need to be top at the top of all the charts. We have got to take our chances. When we do create and we’ve got to make the most of them. Football’s a simple game, score when you get the chance and stop the opposition as much as you possibly can”.

Midfielder Jack Sparkes has started the last four games for the Grecian in the right wing back berth. The 18 year old is enjoying life at St James Park and highlights they just need to concentrate on themselves ahead of the visit of Orient. Speaking to exetercityfc.co.uk “if we focus on ourselves we should do the business. We’re trying to build momentum throughout the season, the more wins we get more confident we will be when stopping on the pitch”.

Despite nine points separating Exeter and Orient, Taylor is fully aware his side need to be on top for to get a result against the O’s. The former Exeter defender has never beaten the O’s as a player but will be hoping that record can change as a manager on Saturday. Speaking to exetercityfc.co.uk on Orient “newly promoted, we’ve not played them for a couple of seasons. A team that has been through a lot on the back of success. The character they’ve got is clear for everyone to see and a spirit about them which is second to none. We’ve got to match them in all areas and hopefully a bit of quality will show through on the day”.

Nigel Atangana and Lee Holmes are both still unavailable due to injury while forward Nicky Ajose is a major doubt after a knee injury picked up in training. Matt Jay is pushing for a start after impressing off the bench at Carlisle.

Taylor on his squad (exetercityfc.co.uk) “three or four are struggling at the moment. Three games in a week, we will need everyone in terms of the squad”. 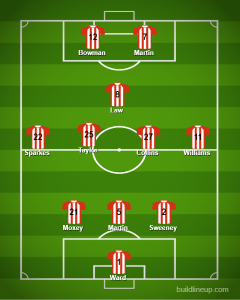