“If We Perform We Feel We Can Get a Result”

Port Vale manager John Askey is hoping his side can take confidence into Saturday’s clash against Leyton Orient. The Valiants picked up their first away win of the season on Tuesday night and Askey is keen for another good performance at Orient. Speaking to port-vale.co.uk “the league is much of a muchness, it is about us, if we perform we feel we can get a result”.

Vale’s win in midweek came in a 3-2 victory at Macclesfield in the Leasing.com trophy. After falling behind early on from Joe Ironside, goals from Scott Burgess, Richie Bennett and Jake Taylor helped them to victory before Theo Archibald pulled a consolation goal back. Askey was pleased with his sides performance stating to port-vale.co.uk “the longer the game went on the better we got, you couldn’t ask anymore of them really tonight. They played some really good football and there were some great goals scored”.

Defender James Gibbons has made the right back berth is own this season and has started nine of the ten league games so far. The 21 year old progressed through the academy and was keen to highlight the difference between this season and last season. Speaking to port-vale.co.uk “we are a lot more organised from top to bottom throughout the club. Last year when we would fall behind we would crumble and we knew it wasn’t good enough. This year it is a lot better, the lads demand a lot off each other. Showed that last Saturday, we fell behind twice and came back to get a draw”

Tuesday victory at Macclesfield saw Askey rotate his squad giving some of the fringe players a chance to impress. The 54 year old joined Vale back in 2019 has been dealt with a hefty injury list in recent weeks but after Tuesday’s performance he is happy with what he has available in reserve. Speaking to port-vale.co.uk “we don’t need to push anyone back, we proved it on Tuesday with the performance with the players who came in”.

Vale sit comfortably in mid table but are without a win away from home this season. Despite being without an away league win since March Askey is not worried about the run and feels it will change soon. Speaking to port-vale.co.uk “the performances have been decent, we might not have won but we have got results. Tuesday night was our first win and we’re not to concerned if it continues. Last season we had a better away record than home so it is about trying to get a happy medium”.

Vale travel to East London looking for back to back away wins for first time since October 2017. Askey’s side have played sides towards the upper reaches of the league so far away from home. Despite Orient sitting near the bottom, Askey highlights the league is very tight. Speaking to port-vale.co.uk “whoever you play in the league you respect them. It is about us if we perform life we are we can get a result. We have just got to make sure we work hard first of all then stop them playing”.

David Amoo, Tom Conlon, Cristano Montano and Rhys Browne are all set to miss out through injury. Mark Cullen is a doubt after picking up a knock against Macclesfield while midfielder Manny Okyleke is unlikely to be risked despite playing 20 minutes on his return from injury on Tuesday night. 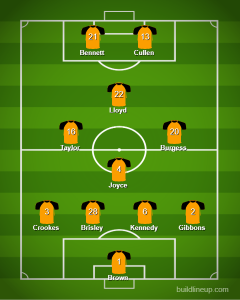